Chapter 2: How to Keep Your License 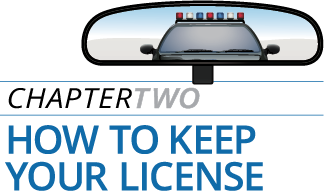 If you commit a serious traffic violation or several violations that are less serious, you can lose your driving privilege through suspension or revocation of your license.

“Suspension” means your license (or privilege to drive) is taken away for a period of time before it is returned. You may be required to pay a suspension termination fee.

“Revocation” means your license (or privilege to drive) is cancelled. To get a new license, you must re-apply to the Department of Motor Vehicles (DMV) once the revocation period is over. You may be required to pay a license re-application fee. Your application may be denied if you have a poor driving record or refuse to meet DMV requirements. Revocation periods may be longer than the minimum periods listed in this publication.

Every driver with a junior permit or driver license could face sanctions and other penalties. For example, your permit, license or privileges will be suspended for 60 days if you are convicted of a serious traffic violation (three points or more) or two other violations.

In addition, your junior permit, license or privileges will be suspended for 120 days when you are convicted of a texting or cell phone violation.

A junior permit must be held for a minimum of six months, excluding any time the permit is suspended or revoked, before a
road test can be scheduled.

If you are 18 or older when you pass your road test for a driver license, or obtain a license following revocation, you will be on probation for six months.

If you are convicted of DWAI (alcohol), speeding, reckless driving, following too closely, participating in a speed contest, or any two traffic violations while on probation, your license will be suspended for 60 days. Following the end of the 60-day suspension, a new six-month probationary period will begin. If you are found guilty of one of the above violations or any two traffic violations during this second probationary period, your license will be revoked for at least six months. If your license is restored following the revocation, you will be on probation for another six months.

If you are convicted of a texting or cell phone violation, your probationary license will be suspended for 120 days.

If You Receive a Traffic Ticket

If you receive a traffic ticket, do not delay – follow the instructions on the ticket for the plea you want to make. Your driver license will be suspended indefinitely if you do not answer the ticket in the time allowed, or pay a fine (other than parking tickets and fines), surcharge, crime victim assistance fee or suspension-termination fee. If you do not respond that you have received the ticket, you could be found guilty by default conviction. If you are convicted by default, your license will be suspended for not paying the fine and a judgment will be entered against you.

The DMV Traffic Violations Bureau (TVB) processes the tickets for non-criminal moving traffic violations issued in the five boroughs of New York City and Rochester. The TVB system allows the other courts in these areas to concentrate on criminal cases. This includes driving offenses like Driving While Intoxicated (DWI) and driving while suspended or revoked. In other areas of the state, traffic violations are processed in the criminal and traffic court of the city, county, town or village where the alleged offense occurred. No matter what court system is involved, every motorist who receives a traffic ticket can present a defense and be represented by a lawyer.

Traffic Tickets Received Out of State

The New York State Department of Motor Vehicles does not record convictions of moving traffic violations by NYS non-commercial licensed drivers in other jurisdictions, except traffic offenses committed in the provinces of Ontario and Quebec in Canada. Out-of-state traffic convictions, except for Ontario and Quebec, are not added to your New York State “violation point” driving record.

However, your New York driver license will be suspended if you fail to answer a ticket for a moving traffic violation in any state except Alaska, California, Michigan, Montana, Oregon or Wisconsin. Your license will remain suspended until you answer the ticket. For clearance of your NYS driver license or permit you must submit proof to the NYS Department of Motor Vehicles that the ticket has been satisfied. If you are a driver from any state, except one of the six states listed above, you will have your driver license suspended in your own state if you fail to answer a moving traffic violation summons in New York State.

If you are over 21 years old and are convicted of an alcohol- or drug-related driving violation (e.g., DUI) in another state or the provinces of Ontario and Quebec in Canada, your New York driver license will be revoked for at least 90 days. Out-of-state drivers who get tickets in New York State can contact the motor vehicle department of their own state or province about how a conviction affects them.

The New York State Department of Motor Vehicles records the conviction of any New York driver for criminal negligence, homicide, or assault that arises from the operation of a motor vehicle and which results in death. The driver license or privilege to drive will be revoked and vehicle registrations may also be revoked. It does not matter if the conviction occurred in this state or another state.

Your driver license or driving privilege can be suspended or revoked for many reasons. NOTE: Motorboat and snowmobile operators less than 21 years old who drink alcohol face similar penalties and sanctions against their privileges to operate a motorboat or snowmobile. Examples of revocations and suspensions that are required by law:

If you are under age 21 when arrested, conviction for any of the alcohol or drug-related violations listed above will result in a minimum one-year revocation. A second violation while under age 21 requires a revocation for one year or until you reach age 21, whichever is longer. These penalties apply to youthful offenders, or if you were arrested or convicted out of state (see Traffic Tickets Received Out-Of-State).

Under the state’s “Zero Tolerance Law,” a driver under age 21 will have the license suspended for six months if found to have a BAC from .02 to .07. A .02 BAC could occur from only one drink. For a second Zero Tolerance violation, the driver license will be revoked for one year or until the driver turns age 21, whichever is longer.

Speeding and Other Violations

Your driver license will be revoked for at least six months if you are found guilty of:

Your driver license will be revoked for at least one year if you operate or allow another person to operate your uninsured vehicle, or if the DMV receives evidence that you were involved in a traffic crash without being insured. If the insurance coverage for your vehicle has expired, you must turn in the license plates and registration to a motor vehicle office. If the vehicle is removed from the road and not being driven, you must return the plates or you can face civil penalties or registration suspension and/or license suspension.

Your driver license will also be suspended indefinitely if you fail to file an accident report, submit a bad check or incur a credit card charge back for DMV fees, fail to pay child support, fail to pay taxes or fail to fulfill a court judgment that results from a traffic accident. This suspension will be in effect until you correct the condition that led to the suspension.

The DMV point system identifies “persistent violators”, that is, drivers who commit a series of violations in a short time period. The table in this chapter lists the point values assigned to various moving traffic violations.* Note that traffic laws which must be obeyed on public highways, roads and streets also apply to parking lots open to the public.

While each violation listed alone is not serious enough to require license suspension or revocation, the accumulation of several violations on your driving record can indicate that action must be taken.

The point values charged against your record are from the date you commit the violation, not the date you are convicted. If you get 11 or more points within 18 months, you will be notified by mail that your driver license will be suspended. You can request a DMV hearing only to show that the convictions in question were not yours. You cannot re-argue the convictions or request the suspension be waived based on special circumstances.

You can reduce your point total by up to four points and save up to 10 percent on your auto liability and collision insurance premiums by taking a DMV-approved “Motor Vehicle Accident Prevention Course.” Completion of a point reduction course cannot prevent a mandatory suspension or revocation or be applied as a “credit” against future points, or prevent or reduce a Driver Responsibility Assessment by the DMV.

Note: Insurance companies can have their own point systems. These have no relationship to and should not be confused with the DMV point system.

*All V&T Law violations result in fines to the driver in addition to license sanctions.

At this time, except where required by law, the term “accident” is frequently replaced by “crash.” This is because a “crash” can normally be prevented. If you are involved in a traffic crash in which another person is killed, your license can be suspended or revoked after a DMV hearing even if you were not charged with a violation when the incident occurred.

In most cases, if your driver license has been revoked, you cannot apply for a new license until you pay a non-refundable $100 fee to reapply for the license. This fee is not required if your license was revoked for operating without insurance or if you were issued a license with conditions or restricted uses.

Vehicle Owners - A law was passed in 2019 1 that authorizes school districts and municipalities to use stop-arm cameras on school buses to impose penalties on the owners of vehicles which pass a school bus while the school bus is stopped for the purpose of dropping off or picking up passengers and red lights on the school bus are flashing.
After the following revocations, you must pay a civil penalty to DMV before your application for a new license can be accepted:

In addition to any fines, fees, penalties and surcharges authorized by law, you may have to pay a “Driver Responsibility Assessment” for some violations that result in a conviction or administrative finding. Your learner permit, driver license or driving privileges will be suspended if you do not make these payments.

This assessment applies to motorists convicted of violations while driving motor vehicles, and in some cases, motorboats and snowmobiles. Completion of a DMV-approved “Motor Vehicle Accident Prevention Course” will not prevent or reduce the calculation of points that affect the Driver Responsibility Assessment.

Driving While Suspended or Revoked

It is a criminal violation to drive while your license is suspended or revoked, and there are mandatory fines from $200 to $5,000. You can face mandatory imprisonment or probation. The vehicle being driven could be seized and forfeited. More severe penalties apply to drivers who drive while intoxicated or impaired by alcohol or drugs while their license or privilege are already under suspension or revocation for a previous alcohol or drug-related incident. Drivers with 10 or more suspensions for failure to answer traffic tickets or pay fines are also subject to severe penalties. Drivers with 20 or more suspensions for failure to answer tickets or pay fines face a criminal charge, even if you were not driving when arrested.