Chapter 9: Alcohol and Other Drugs 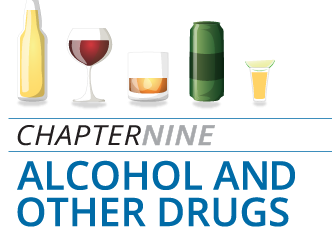 You have probably heard the facts before - driving while impaired or intoxicated is a serious traffic safety problem in the United States. In New York State, more than 40 percent of all highway deaths involve impaired driving. But the facts and statistics do not tell the whole story. Behind the numbers are thousands of lives cut short, permanent or disabling injuries, and families devastated because someone drove while under the influence of alcohol or other drugs.

When you drink alcohol or take other drugs, safe driving is not possible.  Not every impaired or intoxicated driver causes a traffic crash, but each one is dangerous, putting the lives of himself or herself and those sharing the road at risk.

Young people, who have less experience with alcohol or drugs and driving, are at high risk. Drivers under age 21 are approximately 4 percent of the driving population, but 7 percent of the impaired drivers involved in fatal crashes. This is one reason the driver license revocation penalties are more severe for young drivers who drive under the influence of alcohol or other drugs.

Because driving "under the influence" is so dangerous, the penalties for alcohol or drug-related violations are tough and enforcement is important. The chance of apprehension and conviction are high and New York State law strictly limits your ability to plea bargain when charged with an offense related to alcohol or drugs.

Alcohol delays your reaction time, reduces your ability to see clearly, changes your judgment of speed and distances, often makes you less inhibited and makes you more prone to take chances. The important skills you need to drive safely are made weaker.

Because your vision is normally restricted at night, it is especially dangerous to drink and drive after dark. Alcohol also reduces your ability to recover from the glare of headlights. When another vehicle moves toward you, you can be blinded by its headlights for a long period of time.

You do not have to look or feel intoxicated for these things to occur. The symptoms of alcohol consumption can begin long before you become intoxicated or even legally impaired and begin with the first drink.

As alcohol physically limits your ability to drive, it also makes you less aware of what is happening to your safe driving abilities. It becomes difficult for you to judge your condition. You can gain confidence about driving, when you should not be driving at all.

During each mile you drive, you make hundreds of decisions. Your decisions turn into actions that keep your vehicle controlled and ensure you avoid crashes. Alcohol makes it difficult to make correct decisions and to take the safest actions.

For example: You have just stopped at a STOP sign. You see another vehicle approaching the intersection. You must quickly make a decision whether it is safe to go through the intersection. Under the influence of alcohol, you are more likely to make a wrong decision and "take a chance.”  Your slower reaction time, and the bad decision, could cause a crash.

Drugs, which include many prescription and over-the-counter medications, can affect your ability to drive. They can have effects similar to alcohol or even worse. If you take medication, even a remedy for colds or allergies that is not prescribed, check the label for warnings about its effects. If you are unsure, ask your doctor or pharmacist about driving while on the medication.

Never drink alcohol while you are taking other drugs. It could be dangerous, often enhancing the effects of the alcohol and the other drug. For example, taking one drink while you are also using a cold remedy could affect you as much as several drinks.

It can be a criminal offense to drive while impaired by the effect of drugs,alcohol, or the combination of alcohol and drugs, including cannabis, marijuana, and/or illegal drugs such as but not limited to cocaine, LSD, heroin, opium, and by some prescription drugs. Drugs can affect your reflexes, judgment, vision and alertness in ways similar to alcohol and they may have other dangerous effects as well.

A combination of alcohol and other drugs severely reduces your ability to drive and can cause serious health problems, which can include death.

ALCOHOL, OTHER DRUGS AND THE LAW

Blood alcohol content (BAC) is the percentage of alcohol in your blood and is normally determined by a chemical test of breath, blood, urine or saliva. A BAC of more than .05 percent is legal evidence that you are impaired, a BAC of .08 percent or higher is evidence of intoxication, and a BAC of .18 percent or more is evidence of aggravated driving while intoxicated.

Many people think chemical test evidence is required to prove you were intoxicated or impaired. However, the testimony of a police officer about the way you drive, your appearance and behavior when arrested can provide enough evidence to convict you, even without a chemical test.

The BAC standards and penalties for commercial drivers are even tougher than those indicated in this chapter. For complete information, see Section 1 of the Commercial Driver's Manual (CDL-10).

Your BAC does not depend on the type of beverage you drink, how fit you are or how you can "hold your liquor."

For a 150-pound male , each one of these drinks contains enough alcohol to increase his BAC by about .02 percent. On average, it takes the body approximately one hour to remove that much alcohol. Studies indicate that a woman will take longer to process and remove alcohol from the blood. This can cause a higher BAC over a longer period of time.

It takes only a few drinks to increase your BAC to levels at which it is illegal to drive. And remember, the effects of alcohol on your ability to drive begin at even lower BAC levels after just one drink.

Eating before or while you drink helps slow the absorption of alcohol somewhat, but it can not prevent intoxication or impairment if you have too much to drink.

The only method to effectively reduce your BAC is to not drink over a period of time. Coffee, exercise and cold showers cannot reduce your BAC and the effects of alcohol. They can help you remain awake, but it can not change your BAC or make you sober.

Chemical tests use blood, breath, urine or saliva to measure the BAC of a person. If you are arrested for an alcohol or drug-related violation, the police officer will likely request that you submit to a chemical test. Under New York's "Implied Consent" law, when you drive a car in this state you are considered to have already given your consent to take this type of test.

NOTE: Higher fines, longer jail sentences, and increased license penalties (including lifetime revocation) may result from a third or subsequent conviction within 10 years.

* Conviction fine only, does not include mandatory surcharge or crime victims assistance fee.

** The Department of Motor Vehicles determines when your license can be returned. Its return or reinstatement based on state law or regulation, is not automatic. You must reapply for your license and may have to pass a test.

NOTE: License actions for those under age 21 are different.

The table "Penalties for Alcohol/Drug Related Violations" describes fines, surcharges, license penalties and possible imprisonment if you are convicted of an alcohol or drug-related violation. Impaired or intoxicated driving can also have other serious results.

Drivers with repeat dangerous driving convictions in New York State face one of the toughest licensing policies in the nation. These regulations call for:

• Five or more alcohol or drug related driving convictions in the applicant's lifetime, or

• Restore the applicant's license after that additional period as a "restricted" license limiting the applicant's driving to, for example, travel to and from work or medical visits; and

Zero Tolerance for Drivers Under Age 21

The legal purchase and possession age for beverages containing alcohol in New York State is 21. Under the state's "zero tolerance" law, it is a violation for a person under 21 to drive with any BAC that can be measured (.02 to .07). After a finding of violation is determined at a DMV hearing, the driver license will be suspended for six months. The driver then must pay a $100 suspension termination fee and a $125 civil penalty to be re-licensed. For a second Zero Tolerance violation, the driver license will be revoked for at least one year or until the driver reaches 21, whichever is longer.

When you use a driver license or Non-Driver ID card as proof of age to illegally purchase beverages that contain alcohol, state law requires the suspension of your driver license or privilege to apply for a license.

Courts must order all persons convicted of driving while intoxicated or aggravated driving while intoxicated, or of a penal law of which an alcohol related violation of any provision of section 1192 of the Vehicle & Traffic Law is an essential element to install and maintain an ignition interlock on any vehicle owned or operated by such driver for at least 12 months. (This device, purchased and installed at the expense of the motorist, is connected to a motor vehicle ignition system and measures the alcohol content of the breath of the driver.  The vehicle cannot be started until the driver provides an acceptable sample breath.) The 12 month requirement may be waived by the court if the defendant demonstrates that the interlock device was installed for at least six months, unless the court orders the interlock device to be installed for a longer period of time. The judge also must order an alcohol assessment for a repeat offender. If the assessment indicates alcohol treatment is necessary, the judge may be required to order the completion of treatment as a condition of probation.

Drivers who commit these alcohol-related offenses with a child under 16 years old in the vehicle may be charged with a class E felony, punishable by up to four years in prison. (This is known as Leandra’s Law.)

The law also makes it a felony to drive drunk with a conditional license, which is a license that may be issued by the DMV when someone is convicted of an alcohol-related offense. Such a license may be used only for driving to and from essential destinations such as school, work and medical appointments.  The conditional driver license will be revoked if the motorist does not comply with the court terms or for a conviction for any traffic offense except parking, stopping or standing.

HOW TO AVOID TROUBLE

Before you move on to Chapter 10, make sure you can answer these questions: